skip to main | skip to sidebar

On OKCupid I list Secretary as a favorite movie. This is the cleverest, sexiest response to that fact I've received, "I'm sad to report that you and I are only an 84% match. I'll print out a single copy of your profile. Then, I'll take out my red felt-tipped pen and draw a slow circle around all the items I find unsuitable. Then I need you to re-do it."
Posted by I'd rather be a bridesmaid at 4:27 PM 2 comments: 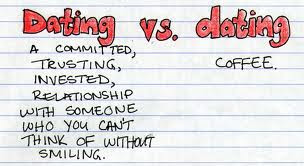 (from hellogiggles.com)
Posted by I'd rather be a bridesmaid at 11:18 AM No comments:

you don't have to f*ck people over to survive

First, I realized that the warm feeling I get from "the best" person is partially because of him and partially because of the person I am around him. I like the way I act, I like the things I'm learning. So, even though I don't want this relationship to end anytime soon I am not panicked trying to hold on too tight. One day we might end up just being friends, but I will still get to be this person; maybe even a *better* person.

Second, he has not shied away from flirtation, romance, pillow talk, future plans even though he only wants to get -this- serious. I think most men would avoid these sweet somethings in order to "not give the wrong idea." And that's probably for the best as most women wouldn't be able to keep the two things separate; he'd text sweetly out of blue and they'd think, "He actually does want to be my boyfriend." But because of item First, I get to enjoy those delights of a new relationship, while still keeping my head on straight (mostly).
Posted by I'd rather be a bridesmaid at 8:09 PM 1 comment:

I've been thinking about bunnies.

First, a wise friend suggested I have to be like a bunny when looking for a date (mate). I need to sniff them and listen to them and use my instincts.

I've been doing that and now I'm spending time with "the best" person.

Three months ago I would have predicted I'd still be doing the bunny - moving quickly, but with a slightly panicked edge. I never would've guessed I'd have the patience to see my date only once or twice a week. I never would've thought I'd be okay with not being monogamous. I would've assumed a big "relationship" talk by now.

But it turns out taking things *super slow* and experiencing what is *actually happening* instead of naming everything and living in the future is really working.

I'm doing my turtle impression, which is way more me anyway.
Posted by I'd rather be a bridesmaid at 8:05 PM 1 comment:

i always wonder this

(what on earth did i think about all the time before you?)
Posted by I'd rather be a bridesmaid at 8:03 PM No comments:

I went on an online date with the dude who invented The Game. Not just any player, he literally wrote a book about hitting on & scoring with women. As soon as we exchanged names and shook hands he looked me up and down, said, "You're totally do-able!" and gave me a high five. From there it just got crazier, more fun and, ultimately, creepier.

I'm proud to say he did *not* score with me.

He has continued to contact me. I will probably never see him again, but I have responded to his texts because I want to get as much information as possible about this rare, repugnant specimen.

Maybe I'll end up writing my own book.
Posted by I'd rather be a bridesmaid at 8:08 PM 2 comments:

I have been surprised that men want to pay for the date. Granted, it's just ice cream or a few drinks but so far none of them have let me pitch in. I appreciate it. But it seems so old-fashioned. And I certainly don't expect it.

If we met online, I don't want to talk about it. We both know we're strangers having an awkward conversation because, for whatever reason, we can't meet people in the real world. We don't need to get all explicit about it. Also, boring!

On 2 of the 3 recent dates marriage and weddings came up. Not for the two of us, just general talk. Of course I don't mind; I have *a lot* of thoughts on the topics. But it did seem somewhat inappropriate considering we just met.
Posted by I'd rather be a bridesmaid at 9:04 AM No comments:

I'd rather be a bridesmaid
I'm a self-professed know-it-all, however I have NO idea what my wedding (should I ever have one) will be like.

I check these on the regular